You are at: Blog » Industry Watch » Explained: What is Blockchain and How does Blockchain Work? 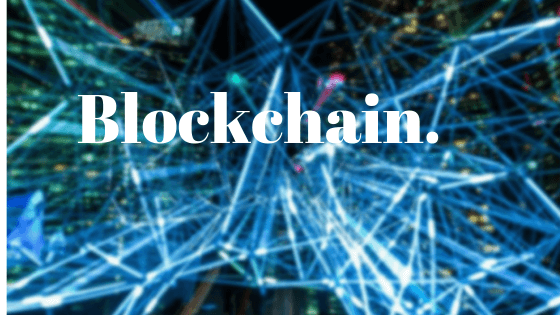 In this era of the internet, we are all aware of the buzzwords like blockchain, bitcoin, and cryptocurrency. But only some of us know when and where to use these words. Blockchain is not a company or an app or a website, it is a form of documentation on the internet.

A blockchain allows the data to be distributed, but cannot be copied. Blockchain was originally invented for timestamps but it has turned out to be forming a new type of internet and is offering potential uses in various fields to the tech community that we shall discuss later.

Blockchain is usually defined as “a distributed, decentralized, public ledger”. However, it is much easier than that. Let us throw some light upon ‘what is blockchain?’.

You may like to read: Unicorn Company: Billion Dollar Startups

The simple answer to the question ‘what is blockchain?’ is in its name itself. Blockchain simply means a chain of blocks and it literally owes its meaning to the word. It is a chain of blocks, containing information which cannot be altered. As all the blocks in the chain are linked to one another, it is almost impossible to tamper with it as one would have to change the information of each block in order to alter one block’s information without it being seen by other participants on the network chain. 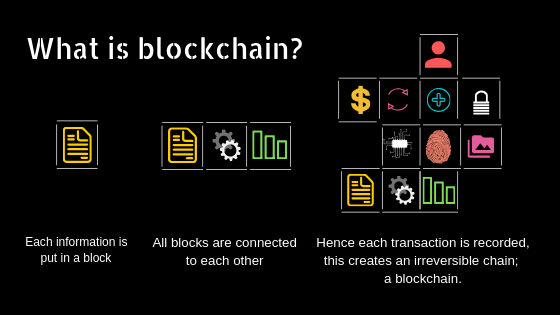 A blockchain by its very nature has no centralized authority and is transparent and open for all to see. It is shared and unalterable and hence, every participant involved is accountable for their actions. The blockchain technology could do wonders to every field today.

For instance, if you want to sell an ebook without having a middleman to eat up the commission, you just have to store the ebook in a block and share the information on the internet via this blockchain link without any cost of transmission. In this way, Blockchain is free and could change the mechanism of every industry cutting off the middlemen.

The blockchain technology can bring tremendous change in the financial industry. It could cut off all the banks and stock market agents that earn commissions for transferring data and giving advice as then everything would be open for all to see and interpret the next movements. All this could happen, once the advantages of this safe ledger are understood and implemented by all and for all.

With this, many industries could diminish as, after all, most of the industries are built on taking a piece of commission for facilitating the processes.

You may also like to read: How does Craigslist Make Money? A Complete Walkthrough

Blockchain came into existence in 1991 when Stuart Haber and W. Scott Stornetta described their work a cryptographically secured chain of blocks. It originally intended to document the timestamps digitally to avoid the tampering. Nonetheless, it went by unused until it was later adopted by Satoshi Nakamoto in 2009 to create a digital cryptocurrency for Bitcoin. The word was intended to be used as ‘block chain’ according to Nakamoto’s original paper, but it was later popularized as a single word, ‘blockchain’, by 2016.

You may also like  ECommerce, The Year of 2015 and NCrypted – Perfect Trinity for your success

After knowing all about ‘what is blockchain?’, let us throw some light upon ‘how does blockchain work?’

How does Blockchain Work?

It’s intriguing how such a complex technology has a much simpler way of working. The blockchain technology is not a new technology rather it is a combination of proven technologies that are implemented in a new way.

In a blockchain, a block is a collection of data. Each block is linked to another block in chronological order adding the data to each block, creating a blockchain in this way. Talking about how does blockchain work, the core definition of the blockchain is that it is a distributed ledger, which means that this collective information is spread across the network and each member holds a copy of this ledger.

For instance, Wikipedia is a type of blockchain. The data on Wikipedia is not written by a single person. The information is added and written by various users across different locations and the information added on the Wikipedia page is verified by all the writers of that particular page and then it is validated and added to the page.

You may like to read: How does DocuSign Work? Modernizing the System of Agreement with DocuSign

Characteristics of a blockchain

To know what is blockchain, it is important to know how it is formed and how it is different from other traditional methods.

1. Blockchain Can Not Be Corrupted.

You may also like  Enlightening Insights: What Is SaaS?

This is all possible through cryptography. Each block in the blockchain is linked to the previous block by storing the cryptographic hash function of the parent block. Hence if there is data tamper in any block, there will be a change in the hash in all the subsequent blocks. This way, any user will easily identify tampering at any point of the ledger without having to check each and every block. If anyone wants to tamper with the blockchain data then one would have to make changes in all the other blocks as well without being noticed. This way, blockchain cannot be corrupted.

This is one of the key features of a blockchain. Blockchain is designed in a way that it is distributed and synchronized across networks. This way it is not centrally governed or operated by any single organization. It can be run by a group of users privately connected through LAN or run across with thousands of users over the internet. Every user is informed about the creation of new blocks in the ledger. This deducts the need of a central party to record the information as the ledger is stored across all the devices in different locations hence there is no chance of data loss. Users can continue to access and add new information to the ledger as long as there is one more online device that has the latest version of the ledger. 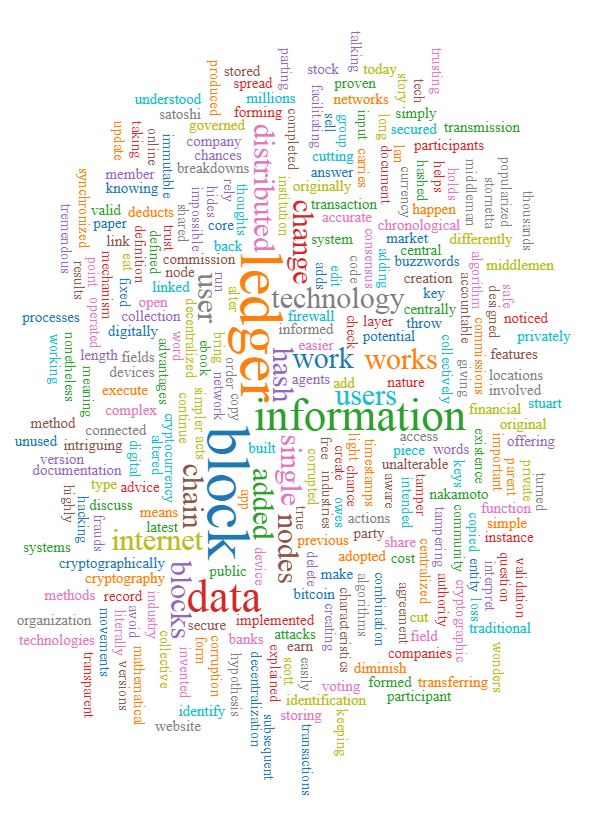 Along with decentralization, cryptography adds another layer to the blockchain to make it more secure. It acts as a firewall. In any blockchain, every information is hashed cryptographically, in simpler words, the information hides the true nature of the data. Every input gets through a mathematical algorithm that results in a different value where the length is always fixed. This works as a unique identification code and in this way, each block in the ledger has a unique hash and also carries the hash of the previous block. Hence, tampering with such data becomes almost impossible.

In currency companies, the users are given private keys to access the data and it also has a public key to make transactions.

To execute any transaction or add information to the blockchain, it is necessary to have validation from all other nodes and after the agreement of all, the new block is added or the transaction is completed. There may be millions of nodes and they might not trust each other, but they trust the algorithms of the system. It works like a voting system. With the ‘consensus’ system, there are no chances of frauds and it helps keep the data most accurate.

The blockchain is a shared ledger technology that will revolutionize the way many industries work. Let’s have a quick recap of “what is blockchain?”. A blockchain is a single, shared and un-alterable ledger that speeds up the transactions. It works on a consensus that nullifies the risks of tampering and alterations and fraud transactions. The blockchain technology is distributed, permission and secure. A blockchain has two, private and public, versions. The private version is for the users who validate each new transaction and have an automatically updated version of the distributed ledger. Everyone can see the public version of the blockchain that maintains transparency in the public. It shows all the information of transactions maintained in each and every block.

Now that you know what is blockchain, let us see how it can be used in several sectors. With many practical implementations, blockchain is already being explored in various sectors like Banks, Cryptocurrency, Voting, and many more.

Banks. There is a fixed time at which banks operate however, online bank transfers facilitate the starting of the procedure but the transaction only takes place in the banking hours hence, blockchain can come to the rescue here. Banks can exchange funds between the institutions in a faster and more secure way.

Cryptocurrency. Like Bitcoin, all other cryptocurrencies could implement the blockchain technology to get rid of the central body of an organization. This will result in risk reduction as well as cut off the transaction and processing fees.

Healthcare. Blockchain could be useful for hospitals as with this technology they could store their patient’s medical records to assure the patients that their records won’t be altered. It could also help to record personal health records with a private key.

Supply Chain. Blockchain can be proof of authenticity for the suppliers to record their supply chain and origin of the product. The companies can benefit from this by recording health and ethical labels.

Voting. Blockchain can be very helpful in this specific area. It could prove the authenticity and leaves no loop for fraudulent and for alterations once the vote has been registered. It was also tested in November 2018 in West Virginia in midterm elections. It also deducts the manpower and provides instant results.

A blockchain is a new method of record keeping. Rather than having a single centralized institution, it is distributed, decentralized and shared ledger. It is better to have it this way because instead of trusting a single entity in this era of corruption, the potential breakdowns, the hacking attacks and so forth, we have multiple different versions of it, collectively produced.

A blockchain is a limitless form of the decentralized ledger. The blockchain technology with its highly promising security and transparency, cutting processing fees and manual efforts, it will see its more practical implementations in almost all sectors.

Are you intrigued by our blog “Hypothesis: What is Blockchain and How does Blockchain Work?”, tell us about your thoughts in the comment section below.