You are at: Blog » Business Models » How does Netflix Make Money? The Key Notes on Netflix

How does Netflix Make Money? The Key Notes on Netflix 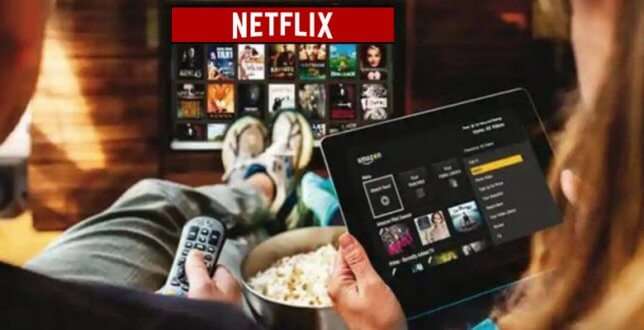 Netflix is a multinational media company. It is one of the leading digital entertainment companies worldwide. It was founded in California in the year 1997. It started as a DVD-on-mail service. Users could rent DVDs of movies and other series and get them on mail. With the rise of on-demand streaming media, Netflix adapted to the change. They started providing the on-demand video and media service in 2007. It is a subscription service since then. Netflix later on added films and television shows to the service.

Initially, Netflix was available online in the US. it expanded its streaming to Canada by 2010 and to other 190 countries by 2016. It has a follower-base of around 137 million subscribers. The service which initially started with providing films and television shows came up with ‘Netflix Original’ films and series in 2016. This increased the number of subscribers by a large margin.

The founders of Netflix are Reed Hastings and Marc Randolph. Both of them were pioneers in their own field. Hastings was also the founder of Pure Software and later on went to sell it for an enormous amount of $700 million. Marc had co-founded MircoWarehouse, which was a computer mail order company. They founded Netflix on August 29, 1997, in Scotts Valley, California. Netflix is now headquartered in Los Gatos.

Unlike other known online entertainment companies, Netflix has raised very low external funding. This was done through Venture Capital and Private Equity. Its basic source of funding is equity funding and debt funding. It has raised about $200 million from equity funding. Also, approximately $1.8 million by the means of debt funding.

Netflix has chosen to invest most of their funds on their own original content called ‘Netflix Originals’. Shows like ‘House of Cards’ and ‘Orange is the new black’ have been a hit among the viewers. Original content are the major way to bring in subscribers to their platform, which has worked for the company.

Like every other business, Netflix also has a detailed revenue model. This has to be looked into if you want to understand how does Netflix make money?

Netflix invests most of its money in these major deals that run the company.

These are the major avenues which run this digital entertainment giant. Let us look into these in a bit more detail.

We know that Netflix started off as an on-mail rental DVD subscription. When the transaction from DVDs to on-demand video streaming happened. Licensing became a huge part of the deal. Netflix had to buy licenses to the films and television shows it wanted to stream on their online portal. To keep the subscribers coming in, Netflix had to make sure that they have the most popular and the best critically acclaimed movies. This is still the major investment the company is running on.

Netflix converted to an on-demand video streaming company in 2007. It started its own production ‘Netflix Originals’ in 2016. With the beginning of this, their own content and productions became another major avenue Netflix was investing in.

After attaining a grand success in the on-demand streaming business, Netflix started their own production. ‘Netflix Originals’ were an instant hit and have been popular ever since. This started with the release of ‘House of Cards’ and ‘Orange is the new black’ which were superhits among the Netflix audience.

These productions took up a huge amount of investment in the company. With these investments, they also brought in regular subscribers. Netflix original productions have been a huge source to bring in subscribers to the business. To maintain these subscribers Netflix now has to come with a lot of their own content regularly.

We can understand this as every show or genre of movie has a particular target audience. It is very important for the company to reach out to that target audience. Once these audiences are made aware of the available content, an interest is aroused in them leading to them taking the subscription. Which brings in business.

Marketing helps the company to find and reach the exact target audience for all their original shows. This is also done for their other movies and television shows available on Netflix.

In any business, research is very important. Netflix particularly takes its research and development very seriously. It makes sure that they find out the best content to get the distribution rights for. Netflix also makes sure that the research and development are done well for the original content they have to produce. It costs them well but it yields the desired results as well.

With millions of subscribers, Netflix has to keep its technology up-to-date. It has to make sure that the online portal by partnering with hundreds of ISPs to take into account the enormous amount of traffic received. All of this is very necessary to give the user a lag free and seamless experience on Netflix.

This involves all the infrastructural costs of the company. It also involves the payroll of all the employees and other general flowing costs.

The company sometimes has to bear some of the extra costs. Some of them can be named as the payment processing fees, DVD postage fees or the amortization of the streaming content.

All of these were the avenues where the multinational entertainment giant is investing its money.

How does Netflix Make Money?

After understanding the funding and the revenue model of the entertainment giant, let us look into how does Netflix make money?

Very evidently, the basic source of income for this multinational company is the subscriptions that come in from the audience. This can be for their own content or the other films and television shows available on the site.

We know that the company provides their users with three types of subscriptions. All of these subscriptions have different benefits one can avail. Let’s have a look at these in detail below:

Netflix was started first in the US. this was the basic on-demand video streaming medium available. It was only available in the US and was later expanded to Canada and the rest of the world.

Once Netflix was expanded to other parts of the world, the revenue increased exponentially. The international streaming market was a great base for the company’s expansion. This was another medium of business for the company

Netflix started off as an on-mail DVD rental subscription. It still operates the same but at a much lower rate. DVDs have gone out of fashion since the digital surge in our lives worldwide. Most people prefer watching movies and television programmes online rather than renting a DVD. this is another form of business that the company holds.

These are the various way in which Netflix makes money. If you’re someone who wants to build a similar business to Netflix this is all you need to know about the revenue model of the same.

If you are attracted to How does Netflix Make Money and also want to develop a similar Application like Netflix then take a look at a customizable ready-to-go Netflix clone script for your start-up.

You may also like  How does WhatsApp Make Money? Everything You Need to Know About WhatsApp Business Model

What is your opinion regarding the article How does Netflix Make Money? Tell us in the comment section below.

Here are some informative articles crafted by NCrypted Websites, it’d help further to understand how do online businesses work with their business models.

An author who likes to read and write about online startups & business models of different categories to explain how online businesses work and make money.